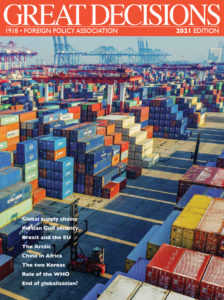 Great Decisions will begin January 15 and run for eight consecutive weeks on Fridays at noon.

One of WorldOregon’s favorite events of the year is the annual Great Decisions series —the oldest, largest grassroots, people-powered, foreign policy series in the country, which had its start here in Portland in 1953. The series features eight hard-hitting topics selected by the Foreign Policy Association and across the region people organize discussion groups and attend our 8-week conversation series.

As in previous years,  this year’s series features some very critical issues that are “ripped from the headlines,” as they say, topics that are front-and-center for how the U.S. is and will continue to be engaging on the world stage.

Brexit and the European Union

Struggles over the melting Arctic

Role of International Organizations in a Global Pandemic

The End of Globalization?