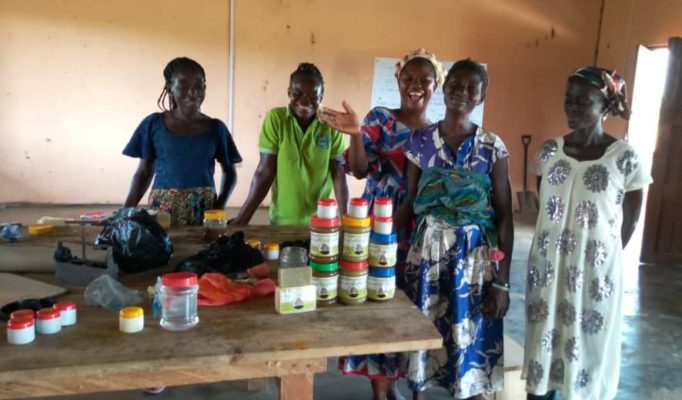 In November of 2019, BamCashea finally raised the funds to purchase a stainless-steel grain processing mill in order to maximize efficiency of the 13-step process of producing shea butter from shea nuts. This reduces the hours of labor– by several days– that the women of the Norntoma Cooperative spend processing shea nuts into butter. After collecting, de-pulping, drying, and cracking the shea nuts, women can now grind the nuts with a machine rather than pounding them in small batches by hand. Once the nuts are crushed, they are then fried, and ground again into a paste. This second grind will also be mechanized by a mill, whereas the nut bits were previously smashed in small batches by mortar and pestle. There are many more steps before the paste is finally hand-whipped into butter by the aluminum pan, but perhaps this gives you a glimpse of why BamCashea is motivated to change the fact that these women —here, and all over the shea growing regions– are often paid less than 1 USD per kilogram of shea butter.

So, this piece of equipment we purchased from a connection Isaac and Tabatha had made in Ghana with the inspiring Kumasi Institute of Tropical Agriculture (KITA), was contracted to a man outside the city who required an 80% down payment (mostly to finance the purchase of his materials) and we waited for delivery. Almost a month after ordering the mill, the man was suddenly unreachable. This is tricky in a lot of ways, but most notably because it is still possible to ‘disappear’ in Ghana. 5 cedis (1 USD) can get you a new SIM card (with a new number) and then -poof! – you are gone to those who don’t know you personally. Luckily, Isaac had a friend who knew the mill manufacturer well, and in another stroke of situational fortune, Treasurer Alice discovered some relatives live nearby Kumasi where the shop was. Alice and the Cooperative decided to act and sent Alice to stay with her family, and to visit the shop every day supervising the man until the mill was completed.

Finally, and even though the man had not paid for its transportation, Alice arrived back in Bamboi with the processing mill. The women were elated, until solemnly and quickly discovering the motor that was placed inside the mill was not the right electrical phase for the wiring. There are no electricians within the Norntoma Cooperative, nor the board of BamCashea; however upon previous consultation with Olo, the Cooperative’s local electrician, we had specifically ordered a three phase motor for the type of electrical wiring set-up at the Norntoma Center. The 15 Hp motor delivered was a single phase, which will require the Center to be re-wired to accommodate the equipment. And to add insult to a slow injury, many of the essential parts for the mill’s operation were not included (such as the belt and power switch).

As you can imagine, no one is happy with the situation at hand, but this type of business transaction is unfortunately so commonplace in many parts of the world and why this article is simply an anecdote from another place on our planet – one without warranties or guarantees—where things aren’t so easy. It is hard to be unimpressed by the women’s level of tolerance, who take it all in graceful stride as they have most of their lives. The Executive Director Tabatha, on the other hand, was not so poised for accepting the poor performance.

Tabatha has pushed for local manufacturing of equipment rather than international imports, both to infuse the local economy with capital from BamCashea’s donors, and encourage the development of local skills in high-quality natural resource processing equipment. BamCashea and the Norntoma Cooperative had intended to work with this manufacturer for the foreseeable future in the acquisition of things like a hydraulic oil press and distillation equipment, to broaden their resource processing horizons, but this threw a serious wrench in our plans. Long story short, a handwritten message was sent via What’sApp images to the mill manufacturer with an avenue for him to repair the relationship, but that it would not be easy to make up for the violation of our trust and established expectations. Our hopes are not high, but finding a new manufacturer in Ghana may not have great odds either.
The Cooperative has already arranged for Olo and the Volta River Authority to upgrade the electric wiring at the center, and Isaac has gathered enough support from community members to purchase the remainder of the small and essential parts to get the mill running. They are relentlessly shooting for their goals to generate income and livelihoods from the local hard labor, encourage more pride in products made locally in Ghana, and develop an industry in Bamboi that discourages deforestation.

You can check out some the amazing work that BamCashea and the Norntoma Cooperative have accomplished in the last year, and some of the talented women that are binding together for good at BamCashea.org. We are currently looking ahead to shea season, beginning in late March, and are currently fundraising to purchase bags of shea – at prices above market value due to the labor that harvest entails — to be stored properly and whipped into beauty products sold by the cooperative for profit. Each bag is 85kg and ran about 300 Ghana cedis in 2019. This translates to roughly 60 US Dollars and represents almost a week of nut collection for a single woman on average. This year we would like to purchase at least 12 bags for the Cooperative, as capital for the year of processing ahead, and we would love your help. Go to Bamcashea.org/donate to give what you can today!

BamCashea is a female, volunteer-run, Portland OR based 501(c)3 non-profit working in Ghana to improve the resiliency of rural livelihoods and natural resources.

Posted in Happening in Oregon, Region: Africa
Leave a comment

Click here to check out this informative article written by Kevin Starr from the Standford Social Innovation Review on how stuff that doesn’t work can screw up stuff that does.

It will take new business models, not small donations, to provide meaningful development.

Nearly a billion people in the world drink dirty water. Two billion don’t have a sanitary toilet. Three billion use campfires every day. Governments and charities spend billions of dollars every year to address these problems. And there are big successes in some places, but more innovation is needed.

In Rwanda, most rural villagers drink untreated water and burn firewood on open stoves. For the past ten years, our team has been learning how to address these challenges. In 2014, we reached nearly half a million people with water filters, improved cookstoves, and extensive health education. In 2015, we are on track to reach another two million people.

In the last three months, we’ve had a staff of nearly 1,000 working across the western province of Rwanda, a 6,000 square kilometer area, distributing filters and stoves at 400 community meetings and visiting nearly 110,000 homes. Working with the Rwanda National Police and the Ministry of Health, we moved 220,000 products across muddy roads and into homes.

So why Rwanda? Almost 20 years ago Rwanda suffered a genocide that killed nearly a million people. Some may still think of Rwanda as failed state.

In fact, Rwanda today is considered among the least corrupt countries in Africa. It has one of the fastest GDP growth rates in the region, and has the fastest annual decline in child deaths globally. But still, pneumonia and diarrhea remain the leading causes of illness and death among children in Rwanda.

Our company, DelAgua, is a for-profit social enterprise using an innovative funding mechanism to distribute the filters and cookstoves free of charge to the poorest 25 percent of households across the country. Our business model involves United Nations carbon credits—generated from the projects themselves and sold to international buyers. This creates pay-for-performance system where we are incentivized to have an impact because that’s how we get paid.

The United Nations carbon credit market is a $120 billion a year industry. More than 90 percent of credits come from just five countries, and less than 2 percent from all of Africa. My team was the first in the world to commandeer this system and apply it to household drinking water.

This approach stands in contrast to a typical approach in poverty reduction programs globally. Typical funders, from church and community groups, universities, all the way up to the U.K. Department for International Development, the U.S. Agency for International Development, and the World Bank, provide funding for projects that are intended to improve the health and livelihood of people in developing communities. These include things like water pumps and water filters, cookstoves, latrines, and solar lighting systems.

This funding usually lasts a couple of years, and during that time the implementers will try to evaluate their impact. If you can afford it, you might run a randomized controlled trial to see if the projects are improving health or other outcomes. But, usually sooner rather than later, the funding runs out, and everyone moves on.

This has resulted in sad statistics. Some estimates suggest that at least half the water programs in some African countries are broken a few years after they’re installed.

Our intention is to instead lay the foundations for a long-term presence in Rwanda, making substantial contributions to public health and economic development.

The program, called Tubeho Neza (meaning “let us live well”) is a partnership between DelAgua and the Rwandan Ministry of Health. We recruited more than 850 community health workers to manage the distribution and help households with installation and maintenance. This year, we’ll be back in nearly every household reinforcing healthy behaviors.

Independent researchers from the London School of Hygiene and Tropical Medicine and Emory University are running a randomized controlled trial and using cellular sensors, household surveys, and other techniques to measure uptake, correct usage, and water and air quality improvements.

Many of us have heard of the idea that a donation of something like $25 will bring water to someone for his or her entire life in a developing country. But $25 donations haven’t solved this problem yet.

We need new and better business models, to engage businesses in these challenges, in a way that can help pay for ongoing services. We need payments to be based on performance, and not pictures and promises.

EVAN THOMAS is an assistant professor of mechanical engineering at Portland State University, COO of DelAgua Health, and CEO of SweetSense Inc.